Please pardon my long absence, but I was traveling in Europe with several friends, and it was difficult to connect to the internet. 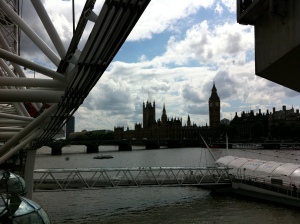 The first stop of our trip was London. It had been several years since I last went there, but nothing really changed. The weather maybe;-). When we arrived, it was actually hot and sunny. Something that I had never ever seen in my trips to England. It kind of took us by surprise since we were expecting cool temperature but we enjoyed it very much. We did a lot of sightseeing in London, as well as pub hunting;-)

Among the many places we visited, we saw the Towers of London, Westminster Abbaye,  Big ben,

and the changing of guards of Buckingham Palace. It was a lot of fun to see everything again with new eyes. It does not matter how many times you see things, they always look different somehow every time you see them again. I enjoyed it so much!

Well, of course, being the food junkie that I am, I was not going to eat “American Type food”. I wanted to eat real British Food se we hunted the best Pubs in Town. 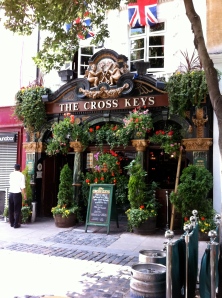 And we saw some great ones. I do not drink beer, but I learn to enjoy a local drink called “Pimm’s.

And since all I wanted to eat was local fares, we had fish and chips. They were great, almost as good as what I remembered. And that  Malt Vinegar… sooo good.

As you see, I did not quite follow my regimented diet. I strayed much this past weeks. Two reasons really. One, with the E-coli scare, we did not want to eat any types of fresh vegetables. And two, to our surprise, much of what was offered in Pubs did not include fresh vegetables. All that was often offered was peas and puree of peas. 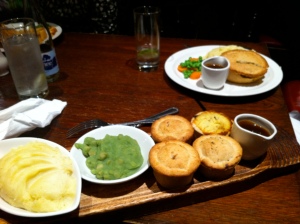 The other thing I wanted to eat was pies. So since I was not able to decide, I just went with the pie tray which included 4 pies. Chicken, beef, beef in beer, and kidney pie.

It was so good, but it all tasted so familiar. The chicken pie tasted much like the American Chicken Pot pie. The Beef pie tasted like French Boeuf Bourguignon, and the Kidney pie tasted like a kidney dish we also serve in France called ” Les Rognons au Vin rouge”. It was good though, but very very filling. I can tell you that the following day, I tried to walk as much as I could to get rid of those extras carbs I had intaken;-)

Well, this was London… next time you will hear about Paris….

Until then, Bon Appetit and Happy Cooking!!!!