France is an amazing country for the variety of scenery and culture that it offers. Traveling through France is like visiting the surrounding countries that are adjacent to her. Indeed, Alsace and Lorraine are reminiscent of Germany, and Bretagne and Normandie, that of England and Wales. La Provence reminds you of Tuscany in Italy, and La Savoie reminds you a bit of Switzerland. Since our time was limited, all we could do was to go to Normandie since it was not so far away from Paris. The girls wanted to see the beaches of Normandie and more particularly the beach of Omaha ( where American Soldiers debarqued on D Day). Though their request was most honorable( I think most people in the world should one day go there to understand the magnitude of the war, and the sacrifice those soldiers took to come and help us),  I wanted them to see that there is more of Normandie that D Day. So our day trip took us along the coast of Normandie and Bretagne.

We first stop at Honfleur. A cute little harbour located on the coast of Normandie. It used to be a significant transit point for goods for England from the beginning of the 12th century. It became even more important during the 16th century as it saw the departure of numerous explorers. Samuel de Champlain departed from there in 1608, and later founded the city of Quebec. 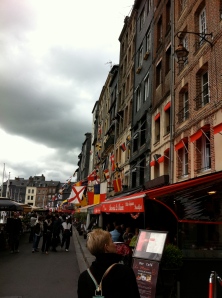 The Port is quite charming with house of slate roofs and slate walls. While we were there, they were getting ready for a festival so they had flowers everywhere, and floats. Very very charming….

From there , we went to Trouville and Deauville. Deauville is regarded as the “queen of the Norman beaches” and one of the most prestigious seaside resort in all of France. It is often referred to as the Parisian riviera. Since the 19th century, the town of Deauville has been a fashionable holiday resort for the international upper class. 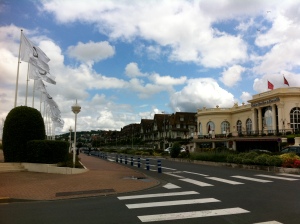 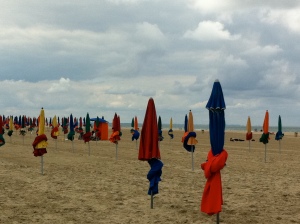 While Honfleur was a quaint little harbor, Deauville was overwhelming and ostentatious. Not really my cup of tea, but certainly something the girls had to see:-) After all Coco Chanel opened her first store there in 1912.

From there, we went to Trouville, a neighboring harbor. We had lunch there and ate the regional dish: Crepes… Yum 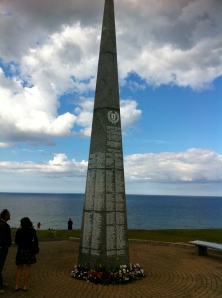 After that, it was the race against time to see as much as we could of D day. 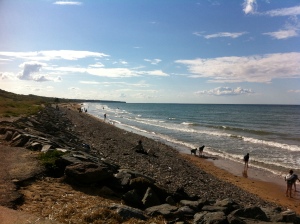 We drove along the coast to see the various places where D day took place from Sword to Juno to Omaha. We stopped at Omaha. I had already been there several times. I went as a child and went back with my children 8 years ago but coming back was as emotional to me as it was the first time. Standing tall on the cliff, and on those beaches makes you so grateful of the life we have today, and make you realize that our mere  thank-yous to Veterans and soldiers just cannot suffice to express our appreciation for what they did to deliver us from  evil.

Enough of my being belligerent. I am not here to bore you, but to tell you about my food experiences and my recipes.

So today, I am presenting you the recipe of  French Crepes because they are the regional specialty of Bretagne. They are the best there, and in Normandie, its neighboring region. If you have a chance to go to Bretagne or Normandie, though, do not forget to drink apple cider ( le doux is the best) with it.

Crepes are similar to pancakes except that they are as thin as cigarette paper. There are two types of crepes. The salty one made with sarrasin or whole-wheat flour, and the sweet ones are made with white flour.

Since my friends, and myself like the white-flour the best, today i will offer you the recipe of that one.

Take a large bowl and place the flour in the bowl. Curve a hole in the flour, and slowly pour the milk while mixing with a whisk. Be careful to whisk slowly so as to make the  mixture smooth and free of lumps. Then add the eggs one at a time and mix well. Add the beer and mix well also. The mixture should be smooth and liquid, but not too liquid. Turn the stove to medium high and place the frying pan on the stove. The frying pan should be hot before starting to fix the pancakes .With a paper towel or a brush, spread butter on the walls of the frying pan and pour a small ladle of crepe mixture. Move the frying pan in a circle motion so that the dough has spread to the entire surface of the pan. Cook for 1 minute. With a spatula, flip the crepe and cook for 1 minute. Place the crepes flat on a plate. Continue the process until you have exhausted all the dough. 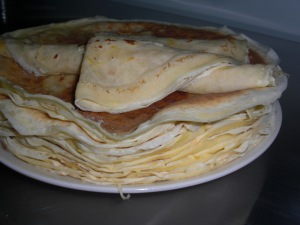 To eat the crepes, there are many things you may do. I love them with sugar and creme fraiche. I spread a bit a creme fraiche,  sprinkle a bit of sugar, roll them in a cylinder or fold them in a triangle and eat them as such.

You may also make salty filling such as ham, mushroom and cheese. Your imagination again is your only boundary! So be creative!!!!!!

One thought on “Normandie: A must……”