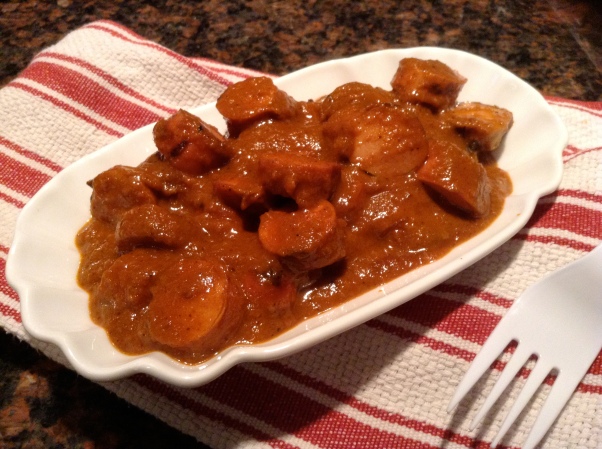 Not many of people has the chance to travel the world, but since our family is multicultural ( my husband is German, I am French and we live in the US), we have traveled to Europe a few times over the past year. We have done it for two reasons: 1, to see our families of course, but also to teach our children our language and culture. 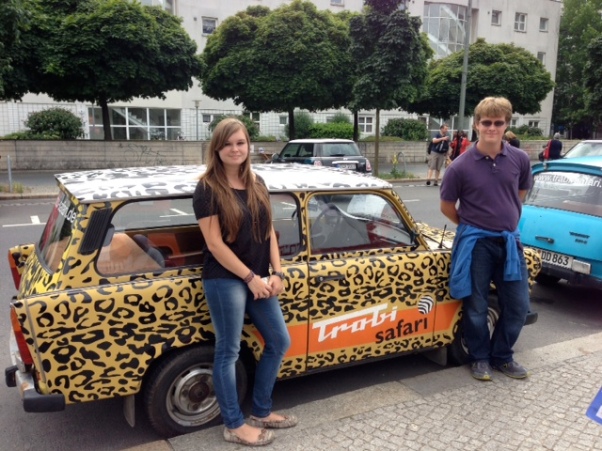 Last year we decided to go Berlin. The kids had asked for years to go there to see the remnants of the war and learn about the history so we did. We learnt so so much. Though the city was still being rebuilt, we could imagine what it would have been like in war times. It was amazing, but it definitely compel you to reflect and ponder. 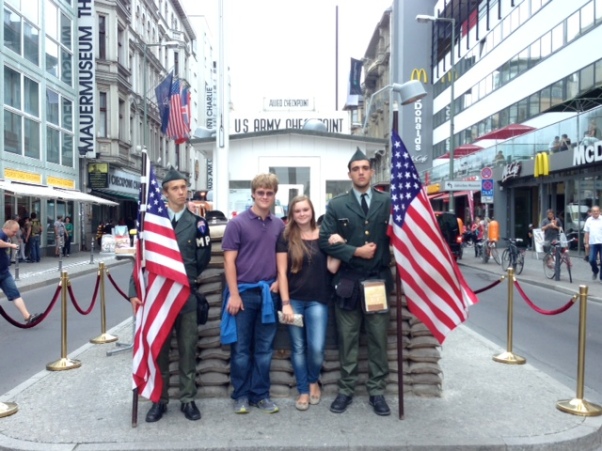 So being in Germany also meant eating German food, which I am not a fan of. I don’t generally care for bratwurst and potatoes, but I was able to find some good food and I really enjoyed my time there. 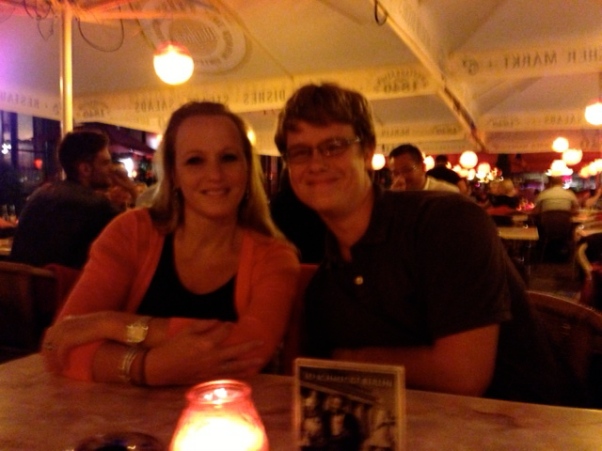 My husband introduced me to the national fare : Curry wurst. Curry wurst is very similar to our hot-dogs in the USA, they are sold at streets’ corners, and are very popular because they are good, fast to get and cheap.

While we were in Germany, my family ate at least one a day because they loved it, and because it is nearly impossible to get a good one here in the USA unless you go to a true German restaurant ( not easy to find).

Well, the other night we had a few friends over and because, we often prepared more food than my guests can eat, there were a few wurst left-overs. The next day, rather than warming them up, and eating them with mustard or ketchup, my husband asked that I made that famous curry sauce to accompany his wurst.

There are tons of recipes out there, and not knowing which to choose, I decided to mix a bit of all of them. As a result, my curry sauce was, according to my husband, the true one. I will take his word;-)

These past couple of days I was home visiting my sweet twin sister. It was nice to  come home and catch up. Besides visiting the region, we have been cooking together. I learned to make some leaven to make my own bread. We made some chocolate truffles with a hazelnut filling, and many other things. Unlike my family, her family will eat everything!!! Asian, Indian, Mexican, Italian.. everything! So it has been very nice to eat a large array of cuisine. This evening she chose to make a Curry and Coconut Pork. She called this recipe: Korma.

I really loved this dish for several reasons: it tasted great, it cooked quite fast,  it required few ingredients and it could be adapted to include other meat or even vegetables.

Korma is an Indian dish, but like many recipes it varies according to region. Sometimes you will find yogurt, cinamon and many other ingredients. I am not sure where this recipe comes from, except that it was the one my sister taught me. I hope that you will enjoy it as much as I have.

My brother-in-law came back from Hilton head yesterday, and brought me some fresh shrimps, big ole large shrimps. I could have just season them with olive oil, salt and pepper but I had seen that cute recipe in one of my cookbooks entitled cuilleres de Frederic Barque that I had to try. The mixture of the green pepper and mango sounded so refreshing that I had to try;-)

Peel, devein and rinse the shrimps. Place them in a bowl and season the shrimps with 1/4 tsp of salt, 1/8 tsp of pepper, 2 tbsp of olive oil, the juice of a lemon and 1/4 tsp of curry powder. Stir and place the shrimp in the fridge to marinade. Meanwhile, cut the mango and the green pepper in very titsy tiny cubes. 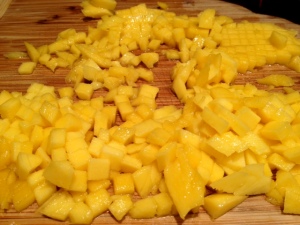 Take a medium-sized frying pan and heat up 1 tbsp of olive oil. When the oil is warm, add 1/2 of an onion sliced. Stir and cook until the onion is becoming golden and transparent. Then add the mango, and the green pepper and saute them for a few minutes. Season with salt, pepper. Add 2 tbsp of white balsamic vinegar, and mix it in. Bring the mixture to boil . When the mixture has come to boil, lower the temperature and cook for a few minutes (2-3). Meanwhile, cook the shrimps. You may cook them in the oven on the silpat for 6 minutes at 400, or you can grill them onto a hot grill for 2 minutes on each sides.

You may also serve single bit portion as shown on the very top picture. Great Appetizers!!!

Each Sunday evening it is tradition at my house to cook a really good meal. I was not going to elude that task, but this gorgeous weather outside did not give me the envy to stay indoors for hours to cook our Sunday meal. I was going to grill. That would cut down on preparation time as well as  clean-up. I had seen those gorgeous jumbo shrimps at the fresh market, and still had a mango left in my fridge so I thought it would be nice to pair the two.

Peel and deveine the shrimps, but make sure to keep the end tail. Set aside. In a medium size bowl, mix all the ingredients above and mix well. Add the shrimps and the mango to the marinade, and mix well to coat the shrimps and mango. Let marinade for 10-15 minutes. Then thread 5 shrimps, and 4 mango pieces onto the skewers. Cook the kebabs on a hot grill for 3-5 minutes, make sure to turn them at least one. The shrimps should be pink.

With a vegetable peeler, slice the zucchinis and the squash into thin long strips. Place them in the large round flexiform, top with the octogonal silpat and microwave for 2 minutes. Once the vegetables are cooked, turn the stove to medium heat, and place  1 tbsp of butter in a frying pan. When the butter is starting to sizzle, drop the vegetables, and quickly stir them. Season with salt and pepper and add the chopped mint. 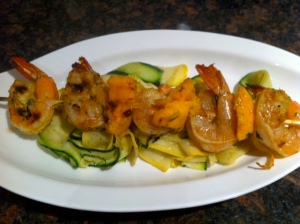 To serve, place the zucchini tagliatelle at the bottom of the plate, and place the shrimp kebabs on top of it. Devour!!! It is truly delicious. Though next time, I think I will try with fresh pineapple instead of mango, I think it will be equally good;-)